Despite the inclement weather, the Ken Wright Memorial Circuit Races produced some fine displays of aggressive racing. Many thanks to all who helped and competed. 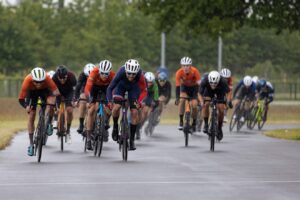 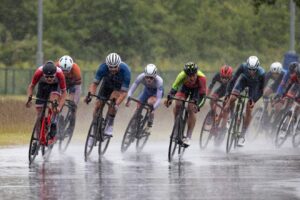 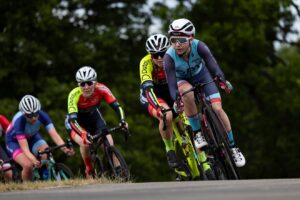 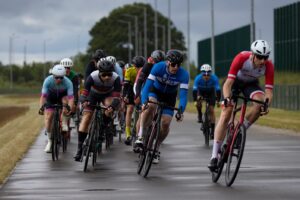 Results can be found via the event page on the British Cycling website. Photo Credit Nick Flexman.

The members of VC Revolution decided to name our ERRL road race promotions in memory of our friend and fellow cyclist Ken Wright.

Ken started cycling after joining the West Suffolk Wheelers in Bury St Edmunds in 1964. This was the start of a lifelong love of cycling and Ken became one of their star riders, breaking many time-trialling records. In 1969 Ken joined the newly-formed Velo Club Anglia Sport, which took road racing as the main discipline and it was this form of cycling which Ken enjoyed. In 1972 Ken returned to the West Suffolk Wheelers and continued to enjoy more success in time-trialling and road racing.

In 1974 Ken and wife Pam emigrated to South Africa where a whole new world of cycling opened up to Ken – track racing. This was the predominant part of cycling in South Africa and an aspect of the sport where Ken excelled with his attendance at meetings in Johannesburg and Pretoria.

Ken enjoyed a lifetime of cycling, both as a competitor and spectator and was a real club-man, always willing to promote events and coach youngsters, with former World Pursuit Champion Colin Sturgess being an early student and Ken’s son David progressing to be a very good rider.

On behalf of Pam Wright, David Wright and Louise Hodgson we are proud to present the Ken Wright Memorial RR; a great testament to a gent who was a true cyclist.